The VARA function calculates the variance based on a given sample. 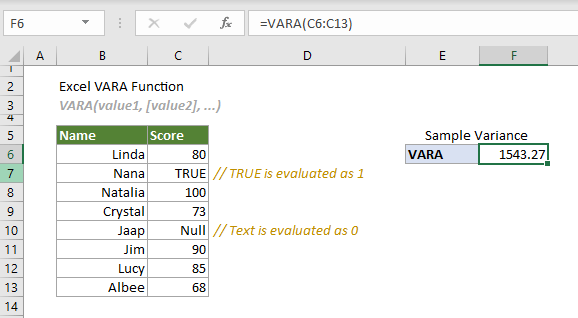 The following table lists all Excel variance functions and their usage notes, which can help you choose the one that best suits your needs.

1. There can be up to 255 arguments at a time.
2. Arguments can be either of:
-- Numbers;
-- Range names, arrays or cell references that contain numbers.
3. The VARA function takes the arguments as a sample of the population.
Tips: If the data you provided represents the whole population, it is recommended to use the VARPA function.
4. Logical values and text representations of numbers that you directly type in the arguments will be included in the calculation:
-- Logical values: TRUE (1) or FALSE (0);
-- Text representations of numbers: Numbers enclosed in double quotation marks such as “2”.
5. By default, VARA function evaluates logical values and text values in references.
-- Logical values: TRUE is evaluated as 1, and FALSE is evaluated as 0.
-- Text value: is evaluated as 0.
Tips: If you don’t want to include logical values and text values in references as part of the calculation, it is recommended to use the VAR.S function.
6. Empty cells, logical values, text, or error values will be ignored in the array or cell references.
7. The #VALUE! error occurs if any of the supplied arguments you typed directly in the function are text strings that cannot be interpreted as numbers by Excel.
8. The #DIV/0! error occurs if there are less than 2 numeric values supplied to the function.
9. The equation of the VARA function is as follows:

Where
-- x represents each value in the sample.
--

is the average of the sample.
-- n is the number of cells in the sample range.

The following table is a sample of scores. To estimate the variance based on it, while needing to evaluate the logical value and text value in the referenced cells, you can apply the VARA function to handle it. 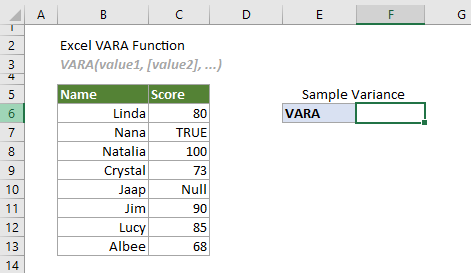 Select a cell (says F6 in this case), enter the formula below and press the Enter key to get the variance. 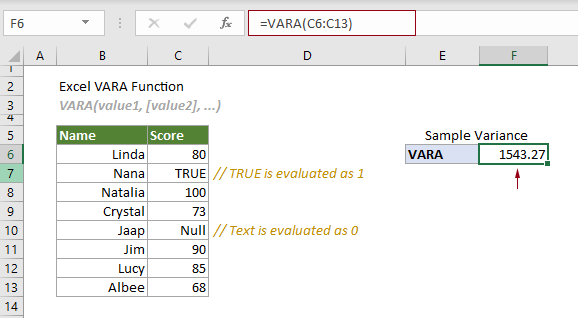 1. The argument in the formula above is supplied as a cell range.

2. In this case, if you apply the VAR.S function to estimate the variance based on a given sample in C6:C13, the logical value and the text in the reference will be ignored. See the following screenshot: 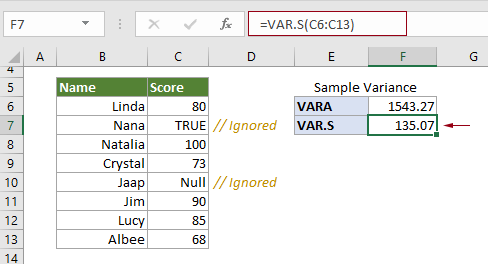