How to remove digits after decimal in Excel?

Sometimes you need to remove all digits after decimal to make numbers to whole numbers. You may think the Decrease Decimal feature can deal with it. Actually, the Decrease Decimal feature just changes a number’s display value, for example, show 2.5 as 3, but the actual value still is 2.5 showing in the formula bar. Therefore, how to remove digits after decimal in Excel? There are several methods for you.

Remove digits after decimal with INT function or TRUNC function 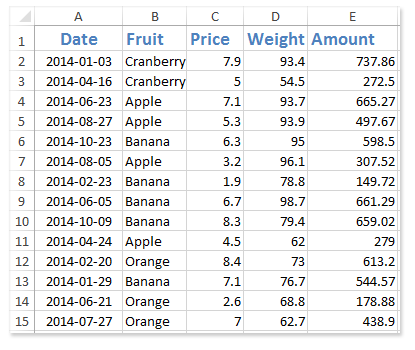 INT function: In a blank cell besides the value you will remove digits after decimal, enter the formula =INT(E2), and the drag the Fill Handle to the range you need.

TRUNC function: Besides the value you will remove digits after decimal, enter the formula =TRUNC(E2,0) into a blank cell, and then drag the Fill Handle to the range you need.

Tip: Remove formulas but keep formula results: (1)select  all formula cells; (2) copy these formula cells with pressing the Ctrl + C keys at the same time; (3) right click the first cell of destination range, and select Values below Paste Options in the context menu.
By the way, If you have Kutools for Excel installed, you can apply its To Actual feature to quickly convert all formulas to their formula results with only one click. See screenshots:

Remove digits after decimal without formula by Round utility

1. Select the cells that you will remove digits after decimal, and then click the Kutools > Round.

2. In the opening Round without Formula dialog box, type 0 in the Decimal place box, check the Rounding down option, and click the Ok button. 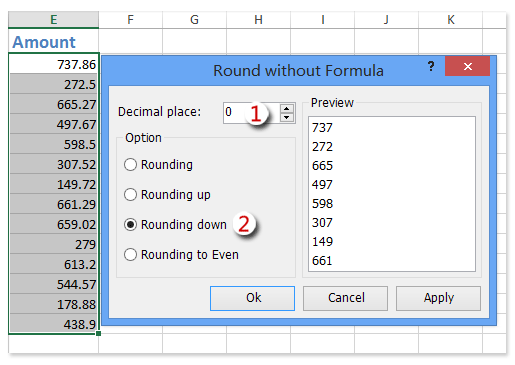 Demo: remove digits after decimal without formula in Excel

Kutools for Excel includes more than 300 handy tools for Excel, free to try without limitation in 30 days. Download and Free Trial Now!

Round a range of cells in Excel

Round / round up / round down a range of cell in Excel

Round to nearest even or odd number in Excel