Outlook 97 is known as the first version of Microsoft Outlook, released in Jan 1997 as a component of Office 97.  Outlook 97 worked as an addon to the Microsoft Exchange Server 5.0 and 5.5, which incorporated most of features of Microsoft Schedule +. It supported users to not only read emails but also manage their contacts, schedule appointments in calendars, and add records in journals.

Subsequently, Microsoft improved the Outlook, and released Outlook 98 (coping with the newest internet standard such as HTML), Outlook 2000 (bundled with Exchange 2000 Server), and Outlook 2002 (included in Office XP) successively.

Outlook 2003, released in Nov 2003, is marked as a milestone of Outlook development. It still was a component of Office 2003 suite, and a stand-alone program.

Office 2007 was released with great interface revolution – Ribbon UI. The Outlook 2007 followed the changes and used the Ribbon UI in sub-windows, such as Message window, Appointment window, Contact window, etc., but remained the classic menu and toolbar in the main interface.

Outlook 2007 released many important and useful features, such as attachment preview, text-messages and SMSs, sharing contacts, exporting a calendar as an HTML file, exporting items as PDF or XPS files, etc.

On the base of earlier versions, Outlook 2010 is improved greatly and get to be more sophisticated.

On one hand, this version supported to add multiple exchange accounts in one profile, enhanced the conversation view to group emails based on criteria across mail folders. And it’s much smarter to warn users if sending emails without subjects, add quick steps to easily finish multiple actions simultaneously with one click, and so on.

On the other hand, social connector is added to connect a variety of social networks, meetings can be scheduled by contacts, visual indicators are added in to-do bar for conflicts and unanswered meeting requests, etc.

Ribbon UI is applied to the Outlook's main interface since Outlook 2010. 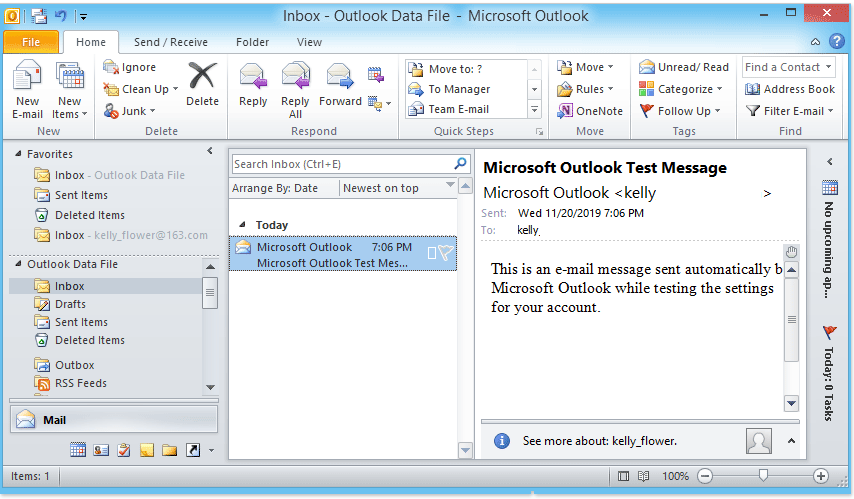 The Outlook 2013 was released in Jan 2013 with a new visualization for scheduled task, attachment reminder, Outlook data file compression, etc. The Outlook 2016 came out with the ability to create, open, edit, and save files in the cloud, Tell me search, etc. And the Outlook 2019 is the latest version at present.

Kutools for Outlook - Brings 100 Advanced Features to Outlook, and Make Work Much Easier!