To limit other characters but only allow some specific ones to be entered into a worksheet, please do as follows:

1. Select one column or a range of cells where you need to only allow certain characters to be inputted.

3. In the Prevent Typing dialog box, please do the following operations:

(1.) Select Allow to type in these chars option under the Define restrictions section;

(2.) Then enter the characters which you allow to be inputted in selection only, or you can click

button to select the cells which contain the characters you want to only allow to be inputted;

(3.) Check the Case sensitive if you want the entered characters are case sensitive, if not, please uncheck. 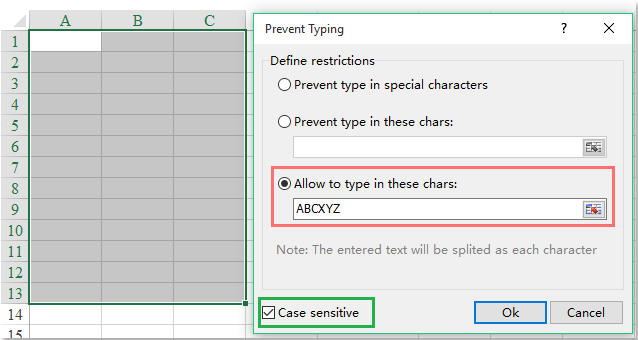 4. And then click Ok button, a message box will pop out to remind you the original data validation will be removed after applying this feature, see screenshot:

5. If you want to continue, please click Yes button, another prompt box is popped out to remind you only certain characters are allowed entered in the selection, see screenshot:

6. Now, when you enter the characters beyond your specified in the selection, a warning message will pop out, see screenshot:

Demo: only allow specific characters to be entered in a range of cells