Easily prevent special or certain characters from being typed in cells

Prevent typing in any special characters

Prevent typing in any special characters

To prevent typing special characters in a selection, please do as below:

1. Select a column or a range of cells which you want to prevent special characters from being typed in. 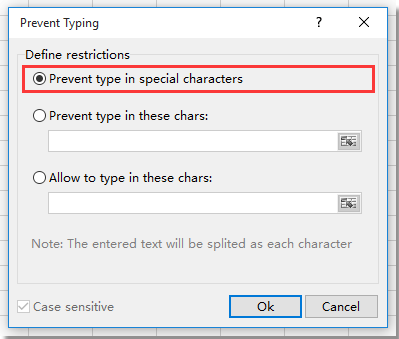 4. Click Ok, a dialog pops out to remind you that it will remove data validation if you want to continue this utility. See screenshot:

5. Click Yes to continue, and another dialog pops out to show which cells have been prevented special characters entered. See screenshot:

6. Click OK to close the dialog. From now on, it will pop a dialog to warn you while you are entering any one of special characters within the selection.

If you want to prevent typing in some certain characters, please do as this:

1. Select a range of cells or a column that you want to prevent some characters from being entered. 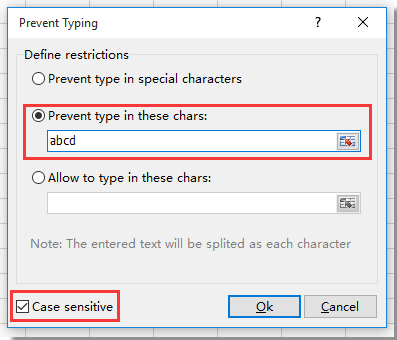 4. Click Ok, a dialog pops out to remind you the data validation will be removed from the selection if you continue this utility. See screenshot:

5. Click Yes to continue, then a dialog pops out to remind you the selection has been prevented from entering specific characters you need. See screenshot:

6. Click OK to close the dialog. From now on, it will pop a dialog to warn you if you enter any one of the specified characters you have prevented from typing within the selection. See screenshot:

Demo: Prevent typing in any special or certain characters

Kutools for Excel: with more than 300 handy features, free to try with no limitation in 30 days. Download and free trial Now!