1. If you want to organize documents which you have added to the group, please click Kutools > Favorites > Organize Document Group to enable the utility.

2. You will see all document groups and documents which have been grouped with Favorites are listed in the Organize Document Group dialog box. See screenshot: 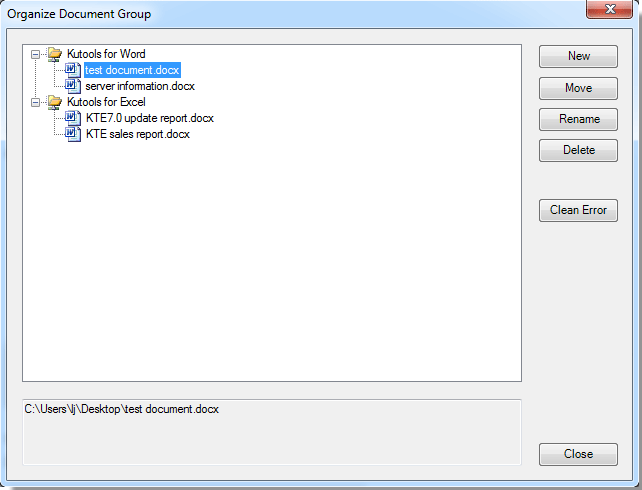 Note. To select any document in the list, you can see the saving path of this document is shown in the pane below the list box.

1. Click the New button from the right side of the dialog to create new group. See screenshot.

2. After clicking the New button, it will display a dialog box as shown in the below screenshot. Please assign a name to this new group and then click OK button. The new created document group will be listed in the tree structure too.

If you want to move a document from a group to another document group, you can do it as follows.

1. Select a document which you want to move to another document group, and then click Move button in the dialog. See screenshot: 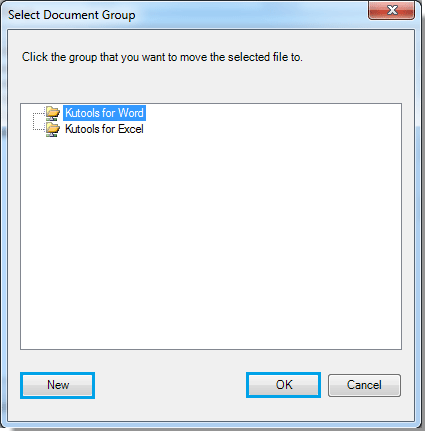 With this utility, you can rename both the document groups and documents.

Note: this Rename feature will only change a document’s indicated name in the group, nor the document name. For example, if you have a document named “File.doc” which had been added to a group, and it has been renamed as “FILE2.doc” by using the Rename feature in the Organize Document Group. After the renaming of the document, when you go to the file folder of this document, you will find out that the name of the document is still be “FILE2.doc”. So the Rename feature in the Organize Document Group only changes the name of document to be indicated in the group.

Note: the Delete feature only remove the document from a group, the documents are still existing in your computer

Sometimes it may cause errors in the Favorites group by following reasons:

The document has already stayed in a group, and you have changed the saving path of this document (it has been moved to another file folder, has been renamed in folder, or has been deleted from PC).

1. For example, after you have added a document to a document group, when you move this document to another folder in your computer, the document in the Favorites group will have a broken link showing on. See screenshot: 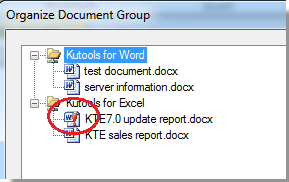 2. Now, you cannot open this document directly from the group. You need to go to the Organize Document Group dialog box, and click the Clean Errors button to clean the error from the document groups

3. After clicking Clean Error, you will see the result as below screenshots show:

This is only one tool of Kutools for Word

Kutools for Word frees you from performing time-consuming operations in Word;