For example you have a list of names which is displaying as "first name, last name" in Excel, and you need to reverse the order and show names as "last name, first name", how will you get it done? Here we introduce the REVERSETEXT function of Kutools for Excel which can help you reverse the order of characters in cells at once.

Let's say there is a sentence in a cell as below screen shot shown. You can reverse the order of all characters in this cell with the REVERSETEXT Function easily as followings:

2. In the popping up Function Arguments dialog box, click the

button to specify the cell that you will reverse the order of all characters in the Txt box. 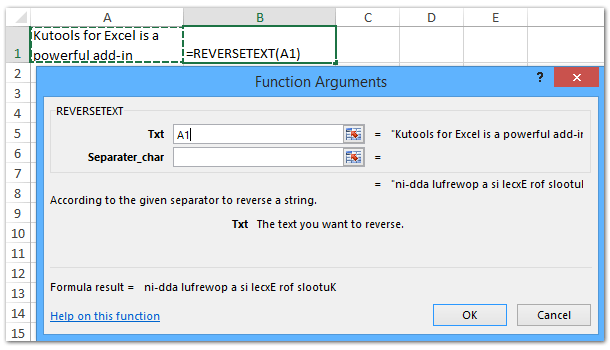 Tip: You can just enter the specified cell into the Txt box.

3. Click the OK button. Then you will see all characters' order are reversed at once.

Tip: After selecting a blank cell, you can enter the formula =REVERSETEXT(A1) and press the Enter key directly to reverse all characters in cell A1.

Sometimes, we may need to reverse the order of characters in a cell with given separator, such as space, comma, semicolon, or something else. For example, you have a list of names whose first names and last names are separated by comma as below screen shot shown. The REVERSETEXT function can help you reverse first name and last name of the full name by comma easily. 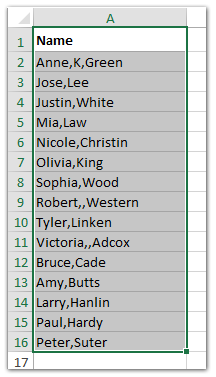 2. In the opening Function Arguments dialog box, you need to:

(1) In the Txt box, specify the cell that you want to reverse the first name and last name by comma;

(2) In the Separator_char box, enter the separator of comma ",". Tip: when you enter comma mark, the quotation marks will be added automatically. 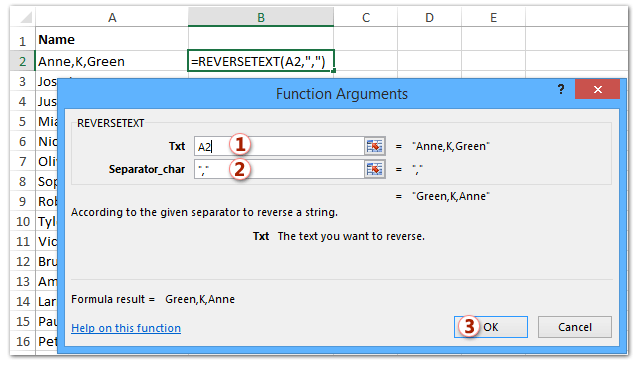 3. Click the OK button. Now you will see the first name and last name of specified full names are reversed by the comma.

4. Select the Cell B2, drag the Fill Handle to apply this function to the range you need. 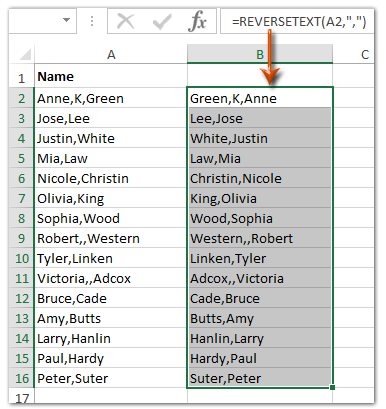 (2) After selecting the blank cell, you can directly enter formula =REVERSETEXT(A2,",") into it, and then drag the Fill Handle to the range you need. If you want to reverse by other separators, just replace the comma between quotation marks with your separator in the formula.