Quickly unprotect multiple worksheets at once

1. Please check the worksheets which you want to unprotect in the list, and then click Ok. It will pop up a window for you to type in the password. See screenshot: 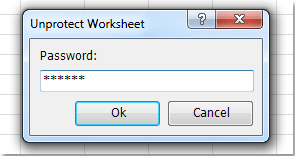 2. After typing in the password and clik Ok. It will pop up a window to indicate how many worksheets have been unprotected. See screenshot:

1. If the worksheets are not protected by the same password, they won’t be unprotected.