Supposing there are workbooks in a folder protected with the same password, and you want to unprotect them all at once. How can you achieve it? Normally VBA code can help to solve the problem, but for Excel newbies, handling VBA is not an easy thing. Here recommend the Decrypt Workbooks feature of Kutools for Excel to help you easily solve the problem.

Please do as follows to unprotect multiple workbooks at once with the Decrypt Workbooks feature.

2. Then a Kutools for Excel dialog box pops up, click OK to continue.

Tips: Before unprotect workbooks, make sure these workbooks are closed in case error occurring.

3. In the Decrypt Workbooks dialog box, you need to configure as follows.

Note: The OneDrive File(s) and OneDrive Folder options only support Excel 2013 and the later versions.

3.2) Then all selected workbooks are listed in the workbook window. You can uncheck the workbook if you don’t need to unprotect it, click the list column header to sort the workbooks, or click Clear all to remove all workbooks from the window.

: Click this button to use the password you have saved in the Password Manage to unprotect the currently selected workbooks. After clicking the button, a list box containing all saved passwords pops up, click one of the passwords to fill in the textbox. 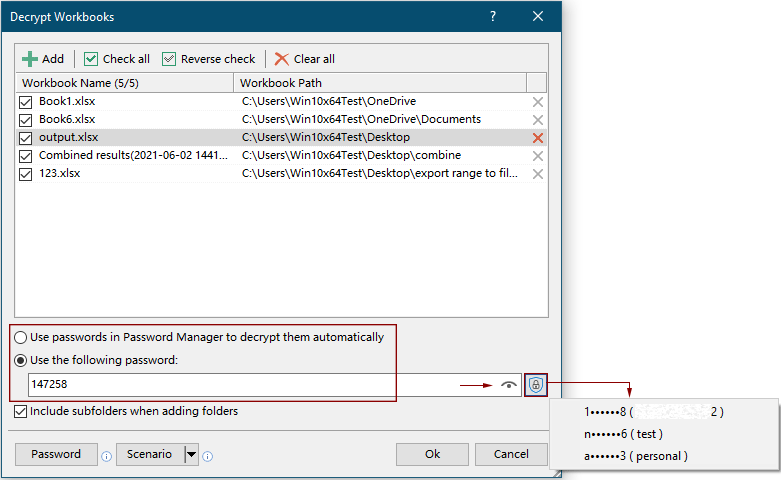 4. Then a Kutools for Excel dialog box pops up to tell you how many workbooks are successfully decrypted, click OK to close it.

5. Another Kutools for Excel dialog box pops up to ask for scenario saving. If you want to save current workbook configuration as a scenario, click Yes, otherwise, click No to finish the operation.

6. If you click the Yes button, a Save Scenario dialog box will open. You need to type a name for the scenario and then click OK button.

Now all selected workbooks are unprotected with the same password at once.

1. Include subfolders when adding folders: after adding a folder, you can check this option to include all workbooks in the subfolders.
2.

: Click this button to open the Open scenario dialog box directly.
Or you can click the drop-down arrow to display the other options:

If you want to have a free trial ( 30-day) of this utility, please click to download it, and then go to apply the operation according above steps.