How to remove numbers from cells which containing texts and numbers in Excel?

This article is talking about removing all numbers from cells which containing texts and numbers, and keep only the texts in these cells as below screenshot shown.

The following User-defined function can help you to remove all numbers from cells and keep only texts. Please do as follows.

2. In the Microsoft Visual Basic for Applications window, click Insert > Module. Then copy and paste the below VBA code into the Code window. See screenshot:

4. Select a blank cell, enter formula =OnlyRemoveNumbers(A2) into the Formula Bar, and then press the Enter key to get the result. Keep selecting the result cell, drag its Fill Handle down to get all results. See screenshot:

You can use the Remove Characters utility of Kutools for Excel to easily remove all numbers from selected cells, and keep only texts.

Before applying Kutools for Excel, please download and install it firstly.

1. Select the cells you need to remove numbers and keep texts only, then click Kutools > Text > Remove Characters. See screenshot: 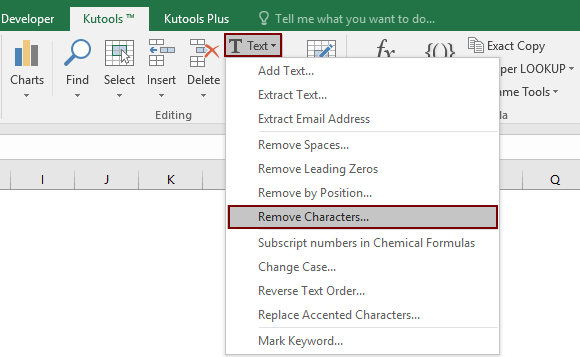 Then all numbers are removed from the selected range, and only the texts are kept.

If you want to have a free trial (

30
-day) of this utility, please click to download it, and then go to apply the operation according above steps.

Demo: Quickly remove numbers from cells which containing texts and numbers with Kutools for Excel

Read More... Free Download... Purchase...
Sort comments by
Oldest First
Newest First
Comments (0)
No ratings yet. Be the first to rate!
There are no comments posted here yet
Leave your comments