How to remove only text from cells that containing numbers and texts in Excel?

As below screenshot shown, for those cells mixed with numbers and texts, how to remove all texts and keep only numbers in cells? Methods in this article can help you.

You can also use the below User-defined function to remove texts from specified cells and keep numbers only.

2. In the Microsoft Visual Basic for Applications window, click Insert > Module. Then copy and paste the below VBA code into the Code window. See screenshot:

VBA code: Remove only text from cells that containing numbers and texts 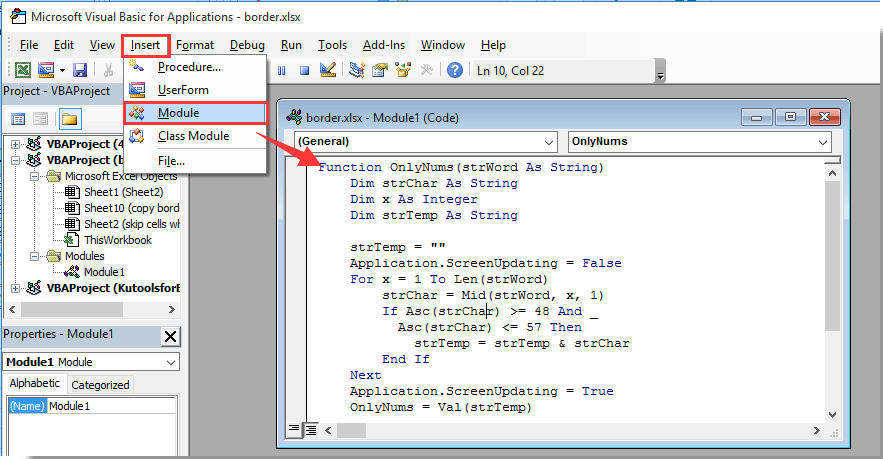 4. Select a blank cell, enter formula =OnlyNums(A2) into the Formula Bar, and then press the Enter key to get the result. Keep selecting the result cell, drag its Fill Handle down to get all results. See screenshot:

Note: In the formula. A2 is the cell you will remove texts and keep only numbers. Please change it as you need.

Now you can see all texts are removed and only numbers are kept in specified cells.

This section will recommend the Remove Characters utility of Kutools for Excel. With this utility, you can remove all non-numeric characters from cells by just several click, and keep only numbers in cells. Please do as follows.

Before applying Kutools for Excel, please download and install it firstly.

1. Select the cells you need to remove texts and keep numbers only, then click Kutools > Text > Remove Characters. 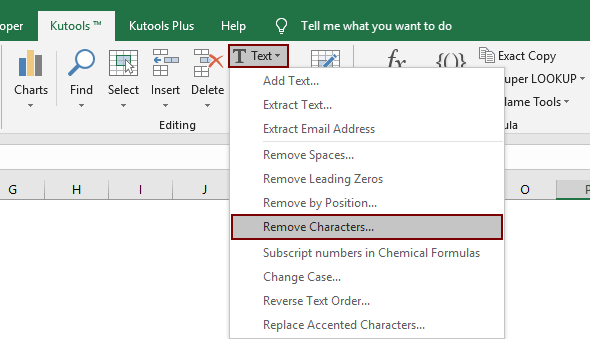 2. In the Remove Characters dialog box, only check the Non-numeric box, and then click the OK button.

Then all non-numeric characters (texts) are removed from selected cells immediately as below screenshot shown.

If you want to have a free trial ( 30-day) of this utility, please click to download it, and then go to apply the operation according above steps.

Pete
#39522
This comment was minimized by the moderator on the site
I have used excel for years but not a power worker never used Visual Basic in a spreadsheet before. This method worked absolutely first time just following the clear instructions above and saved me hours cleaning up an imported Sheet. Many thanks - much appreciated. Cheers
Reply
0
0

crystal     Rolands
#39967
This comment was minimized by the moderator on the site
Hi Rolands,
Sorry I don't quite understand what you mean. Do you want to keep the leading zeros after removing only the texts from cells?
Or you can upload a screenshot of your data here to describe the problem more clearly.
Reply
Report
0
0
There are no comments posted here yet
Leave your comments