How to rename workbook in Excel?

2. In the Look in list, click the folder or drive that contains the workbook that you want to rename.

3. Locate and open the folder that contains the workbook that you want to rename.

4. Right-click the workbook that you want to rename, and then click Rename.

5. Type in the new workbook name, and press Enter.

Note: If the workbook you want to rename has been opened in Excel, you have to close it first for renaming it.

If you want to rename the current workbook in Excel, you can rename it in the Save as dialog box.

In Excel 2007: click Office icon > Save as, type in the new workbook name and save it.

With Office Tab or Office Tab Enterprise, you can comfortably rename the current workbook by Right click on the workbook tab and choose the Rename command item to rename it easily. See screenshot:

Office Tab brings you Tabbed Document Interface in Microsoft Office 2003, 2007, and 2010. Get it now with no feature limitation in 30 days. 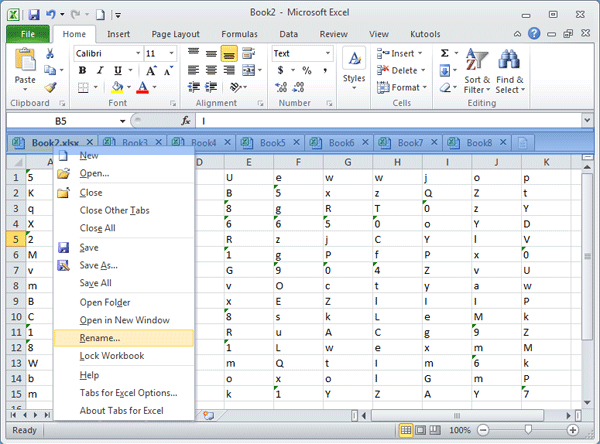 Note: the not yet saved document cannot be renamed by this command.

Sort comments by
Oldest First
Newest First
Comments (1)
No ratings yet. Be the first to rate!

RAP
#25480
This comment was minimized by the moderator on the site
None of this information is any help to me! I need help for Excel on an iPad
Reply
0
0
There are no comments posted here yet
Leave your comments