The NORM.S.INV calculates and returns the inverse of the standard normal cumulative distribution that has an arithmetic mean of 0 and standard deviation of 1 with a given probability. 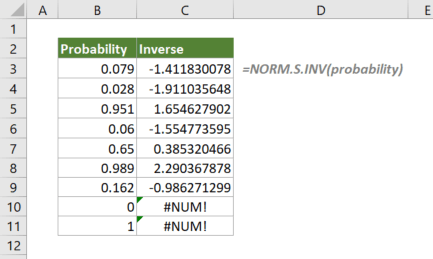 To get the inverse of the standard normal cumulative distribution with the probabilities as shown in the screenshot below, please copy or enter the formula below in the top cell C3, and press Enter to get the first result:

√ Note: After entering the formula, drag the fill handle down to apply the formula to the below cells. 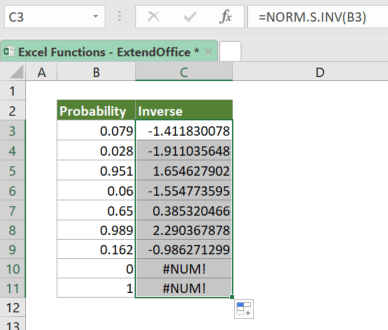 Note that for the normal cumulative distribution (probability) that is calculated with NORM.S.DIST(z, TRUE), the NORM.S.INV function will return the z value based on the probability result. See screenshot:

The NORM.INV calculates and returns the inverse of the normal cumulative distribution for the given arithmetic mean and standard deviation.

The NORM.DIST calculates and returns the cumulative distribution function or probability density function of a value for the given arithmetic mean and standard deviation.

The NORM.S.DIST calculates and returns the standard normal cumulative distribution function or probability density function of a value for an arithmetic mean of 0 and standard deviation of 1.